Winter Camping and Shelter Building with the Akka

With a 6AM start, coffee and breakfast in hand, the three of us were on the road and at the trailhead by 9:30. After a winter camping trek last season, I realized going in without a tent and building a shelter can be much more comfortable through a long, cold night. I also decided that pulling a pulk would be easier, so I gave it a try. DJ and Chris loaded up their packs as I loaded up my sled, and off we went over the river and into the Algonquin Highlands.

We decided to hike along the packed down trail for a few hours and then turn off into a valley to a creek surrounded by small lakes and ponds. I quickly realized that pulling a sled through the highlands on an up-and-down trail wasn’t the best idea but pulled through anyway. After a couple hours, we pulled off the trail through thigh-deep snow and down into the small valley to find a good place to call home for the weekend. We struggled through some chest high brush to an opening along the frozen creek where we decided to build our lean-to.

A quick break to catch our breath and then we were off in search of standing deadwood for firewood and smaller living trees for the shelter beams and supports. The site was surrounded by various options, as it was a transition zone between a pine stand and a hardwood forest. 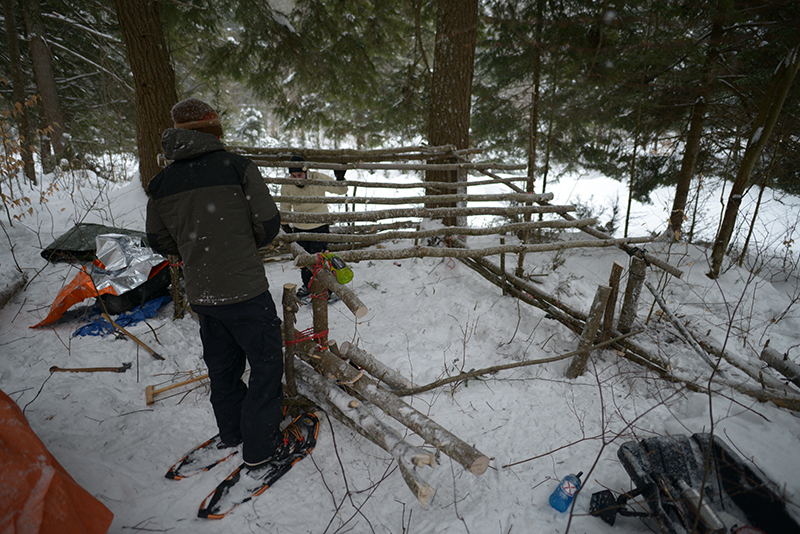 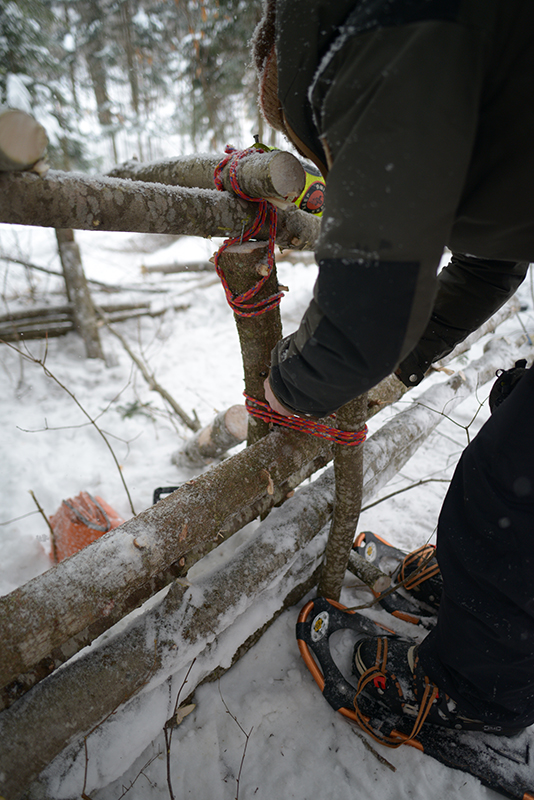 We got to work with the Hults Bruk Akka Forester’s Axe and started with some larger trees to make into vertical supports and main cross-beams. We dug a couple feet down through the snow and into the ground to ensure that the supports are sturdy. We decided to use two large existing pine trees as the front of our shelter and to reduce the amount of trees we had to cut. With some rope and proper placement we had the horizontal supports up and started finishing the roof and the side. 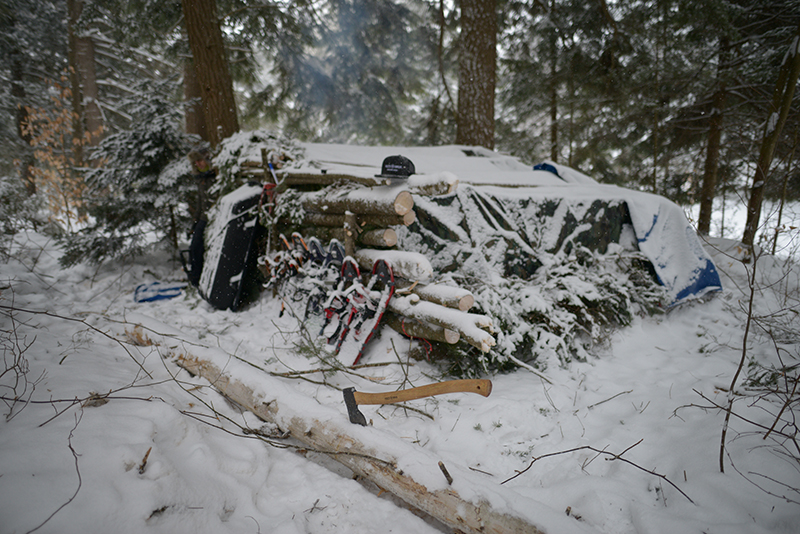 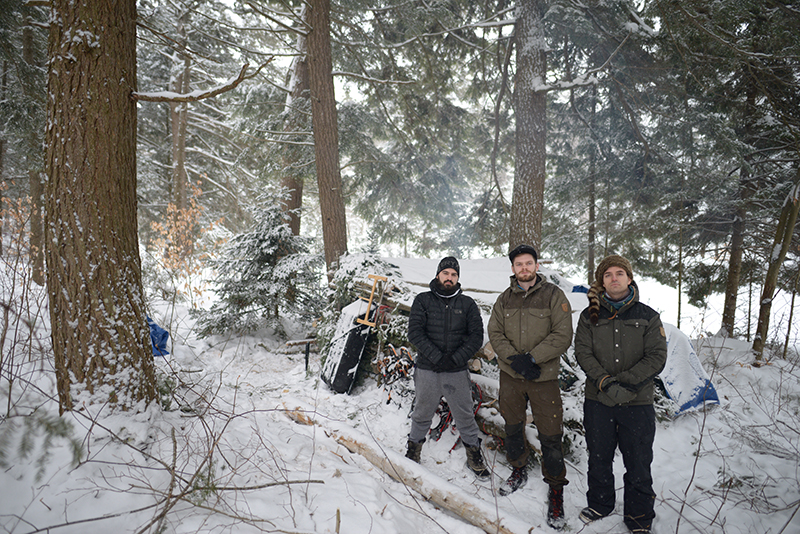 The shelter was then finished with tarps on the roof and wrapped around the back. A thigh-high firewall at the shelter opening helped to reflect some heat back off the fire. After about 3 hours of building the shelter it was finally done and looking prime before the sun went down. We put a tarp on the floor after packing the snow down some more and then had each of our sleeping mats, blankets and sleeping bags ready to go. 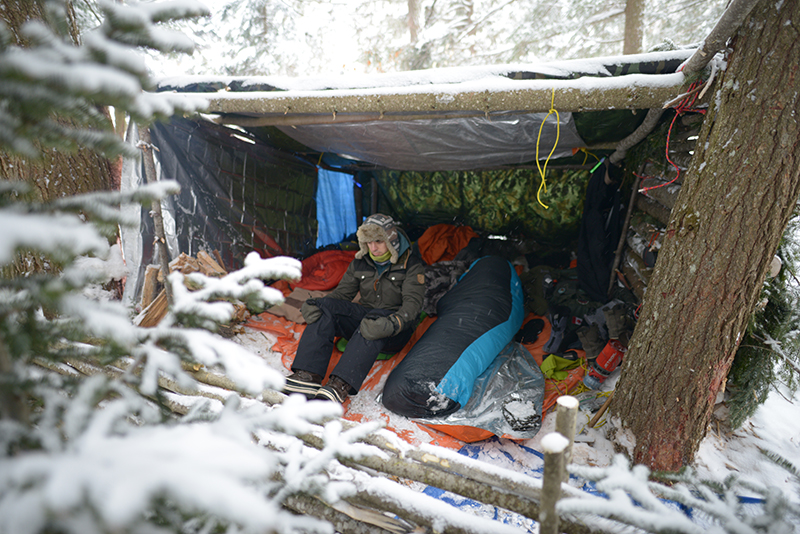 After another small break we were back at it cutting some more firewood for the night. It wasn’t long until we had a nice stack of wood for the night and we had a pot of chili warming up over the coals. After dinner we reminisced about past trips in Algonquin, along Lake Superior and our road trip camping in the Maritimes and northeast USA. Before we knew it we were all down and out for the night. 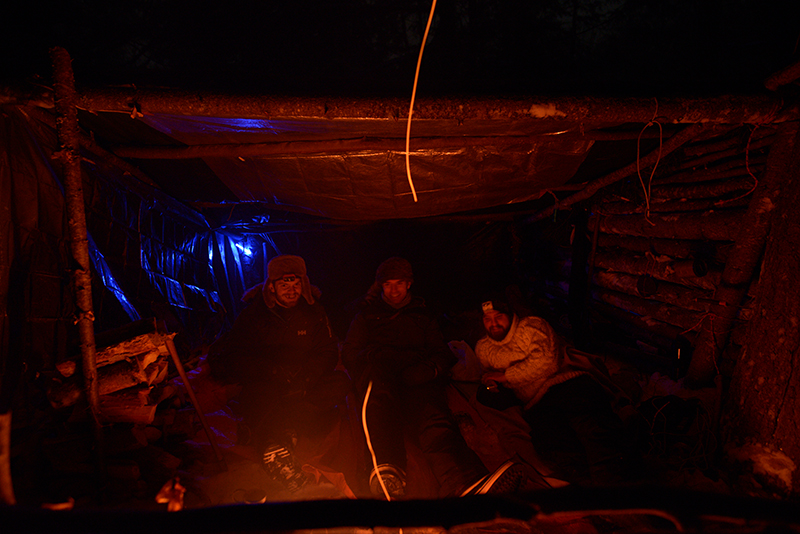 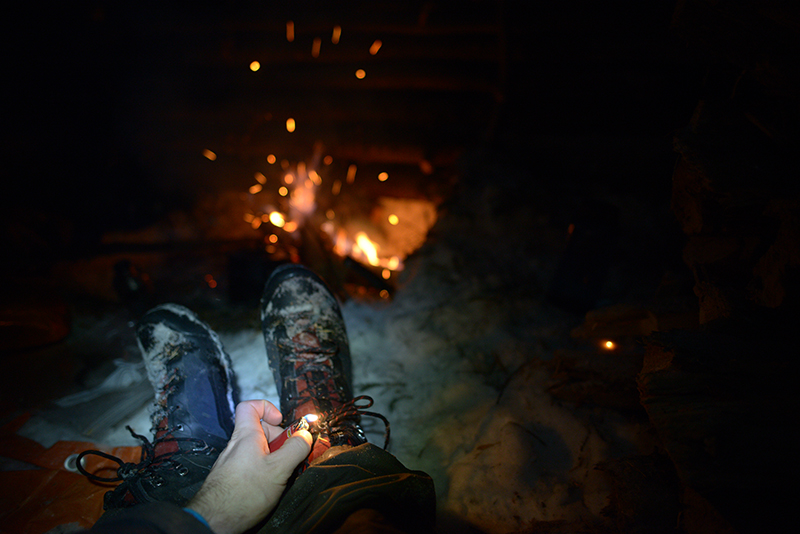 I think I had one of my best backcountry sleeps despite waking up a couple of times throughout the night to brush the fresh falling snow off my face. I do have to mention that I had my Mountain Hardwear Hyper Lamina -16C sleeping bag and had to remove a layer in the night. My Suunto watch measured -10C at night so I was well prepared. Once the sun came up I was up and ready to go and was the first one up as usual. 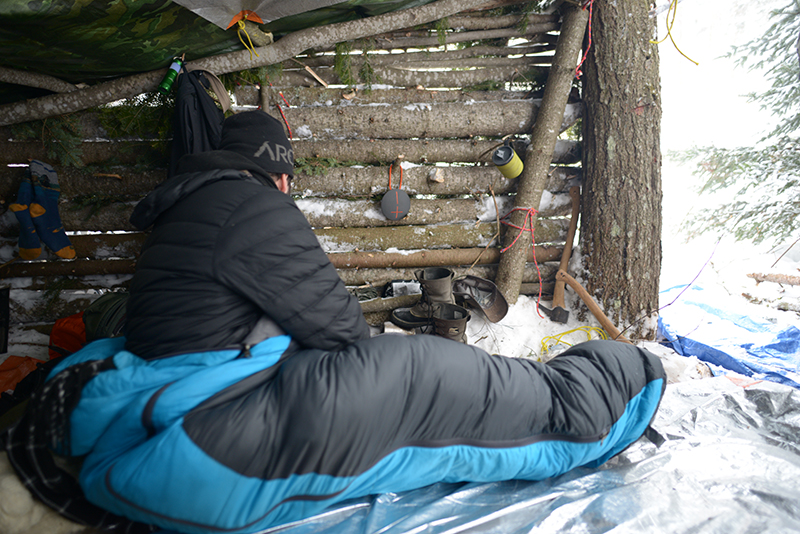 I decided to go for a quick walk around the site to take some photos before the guys got up and realized that it had snowed another 15cm overnight. After splitting a couple of logs to warm up, we had a fire going  to thaw out our boots and the JetBoil going for espresso. 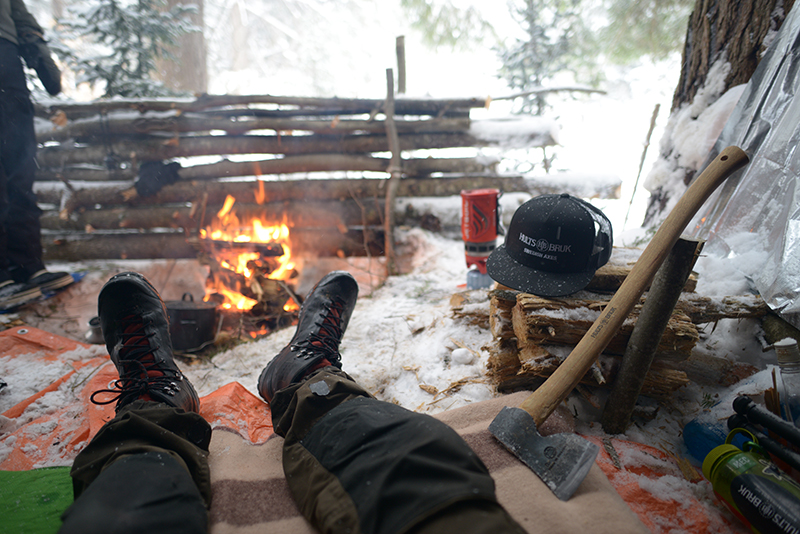 After a couple of group photos to document our wicked shelter and weekend, we made some breakfast, packed up and started the trek out. After struggling once again with the sled up and down the numerous hills, we were back across the river and at the trailhead. Another successful weekend in the Algonquin Highlands! 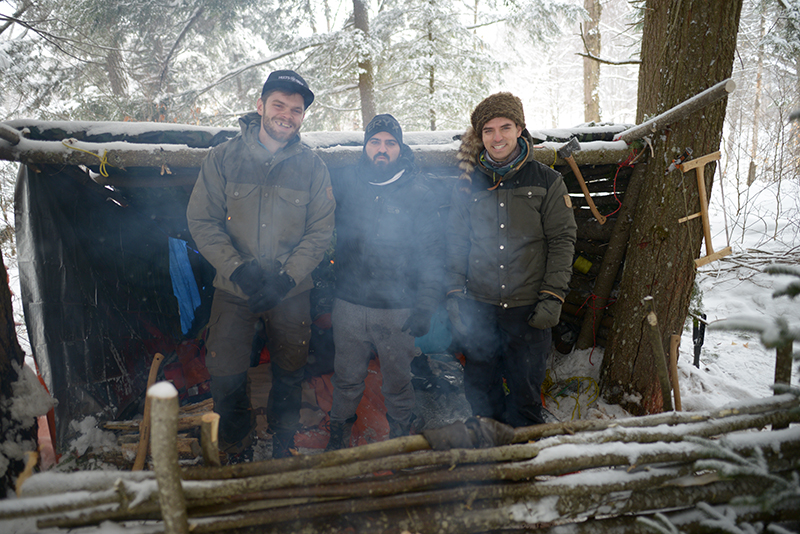